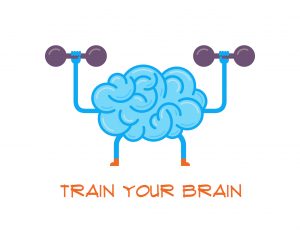 Perhaps you have seen this:

Two opponents, seated at opposite ends of a table. Their heads are adorned with a broad, pliable band held in place with a velcro closure. From the band extends two electrical wires that connect to the table.

In the middle of the table, a transparent plastic pipe runs from one person to the other, ending about a foot away from the table’s edge. Inside the pipe, a small ball moves – at times jerky, at times smoothly – between the two.

Neither of the opponents touches the ball with their hands. It moves about freely, as if by magic.

Or perhaps you have seen a documentary showing a person with several electrodes attached to their head, sitting in front of a monitor. On the screen is what seems to be some kind of computer game. At the bottom edge is a display with sort of electric wave patterns in constant motion.

Both oddly futuristic scenes. Both rely on the same mechanism – brain waves.

The ball, as well as the computer game, is controlled through neurofeedback technology. One is a fun demonstration in a science museum, the other a useful technology to help people with various physical and mental issues.

Every moment of your life, your brain gets feedback from the world around you. This helps it to store information about a great variety of things by creating neural connections.

When your brain is in balance, all your neural connections work together collaboratively. However, when an imbalance or dysfunction of these connections and of electrical brain wave frequencies exists, problems can arise. This is where neurofeedback comes in.

Neurofeedback is a type of biofeedback that can teach you to control your brainwave patterns at will and treat various physical and mental health conditions. In other words, neurofeedback puts you in the driver’s seat of your mind and harnesses your brain’s awesome ability to heal and return to normal balance.

How Does It Train Your Brain?

First, consider for a moment how your brain functions.

Your brain consists of billions of neural cells that form an expansive network of nerve connections. These cells generate electricity that makes it possible for these connections to communicate with each other. And this electrical activity forms patterns – brain waves.

Brain waves can be measured in electromagnetic frequencies (Hertz – Hz). Scientists have recorded these waves and found five main patterns: delta, theta, alpha, beta, and gamma. Each corresponds to a different state of your mind: sleep and repair, trance, relaxation and restoration, attention and focus, and creativity.

Neurofeedback can capture the electrical signals of brain waves and use a specific software to display them on a computer screen. A multitude of programs that address different issues can aid you to become aware of, manipulate, and monitor your brain wave activity during various exercises. It’s like playing a video game with your mind.

Once your brain learns, you can decrease the frequency of training sessions and eventually stop them.

How Does Neurofeedback Help With Anxiety?

Brain training can help you develop the skills to change your response to stress and reduce or eliminate your anxiety.

Alpha waves are 8-12 Hz and occur when you’re relaxed. Beta waves, 15-20 Hz, have to do with your state of alertness. But high beta waves (20-36 Hz) show body tension, stress, and anxiety. That means that when you increase alpha wave activity while decreasing beta wave activity, you can reduce stress and anxiety.

With a little practice, neurofeedback procedures can help you learn to produce the brain wave patterns that are most helpful to you. It’s one of the quickest and most efficient ways to calm and lessen your anxiety for the long-term.