Anyone can benefit from improved brain function. The brain governs all physical, emotional, and cognitive functions, and in an ideal state, it can naturally do its job quite well. As we will see, though, there are many occasions where the brain is not functioning in a smoothly-coordinated way. Neurofeedback training is a well-researched, highly-effective brain training method that can reduce and even extinguish many emotional, behavioral, and somatic disorders. Neurofeedback Training can help you to:

A person may be born with a tendency towards brainwave dysregulation, meaning that the brain has a hard time keeping all of its rhythms stable and in balance. Examples include "true" or neurologic ADHD, and some forms of migraine headaches. Genetics can also contribute to sleep regulation problems, pain sensitivity, anxiety, and depression.

Exposure to television during the brain's early developmental phases has now been linked to the occurrence of ADHD. Research supports the finding that watching TV before the age of 5 causes the brain to resonate with the patterns emitted by the TV. This can create an excess of alpha brainwaves, causing the brain to shift into a non-attentive “offline” state. A child’s developing brain is not strong enough to compete against this input, and it “defaults” to Alpha states, making it more difficult to transition into the attentive, goal-focused state characteristic of Beta waves – the kind needed to focus on homework problems.

Trauma, both physical and emotional, can be very disruptive to brain functioning. Although the brain naturally works towards proper regulation, the occurrence of trauma may get it stuck in a “loop” where one will see typical PTSD symptoms-- such as recurrent nightmares, panic, flashbacks and avoidance-- that are easily triggered. These states all come with unbalanced brainwaves that then settle in and can manifest in emotions and behaviors that are distressing.

Chronic stress, injury, illness, inadequate/poor nutrition, and toxic substances can all lead to poor brain regulation. The brain requires specific minerals and nutrients, adequate water, and a non-toxic environment to be able to function optimally. Correcting and improving the physical/organic environment is important, but the brain can't always resume its original functioning on its own.

Brainwaves are the basis of everything our brains do. Neurofeedback training uses computers and research data to analyze brainwave activity so that the brain is able to "look in a mirror" and notice what's "in tune" and what isn't. With this information, the brain can be trained to re-regulate and improve its functioning.

Delta is associated with the unconscious mind, as these brainwaves are very slow and typically occur in deep sleep. Delta brain waves can aid in improving empathy, and also act to decrease Cortisol, a hormone that is released due to high levels of stress, that can effect our emotional and physical health.

Theta is responsible for creativity, daydreaming, abstract thinking and can be described as the border between the conscious and subconscious parts of ourselves that is normally inaccessible to our waking minds. A person who has been driving on the freeway and discovers they can't recall the last 5 miles is often in a Theta State.

Alpha is a low arousal state where the mind is alert yet relaxed, similar to a meditative state.  Alpha waves are also used by the brain to "idle" itself and to rest areas not actively involved with processing information.

This is the brain state of our normal waking consciousness. Beta is where we are alert and actively processing information using higher-level thinking processes. Beta states are where concentration, learning, and memory are functionally employed in reasoning, problem-solving, logical   thinking, planning, organizing, and interpreting.

People who experience symptoms related to ADHD often times have deregulation in Theta and Beta waves in the frontal brain area. Theta dominance essentially overwhelms the front part of the brain, thus leaving Beta "muted out" or underactive. With Neurofeedback Training, Beta waves in the frontal part of the brain are rewarded through reinforcement, and frontal Theta activity can be diminished (inhibited), thus restoring the proper balance between the two types of waves. In the SPECT image below, the orange and yellow areas show the dominance of Theta activity prior to Neurofeedback Training; the image on the right shows how diminishing the Theta waves puts them into a state of functional balance, thus allowing Beta activity to cease being stifled or muted in the mix. 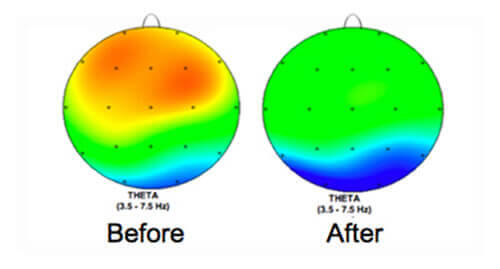 Brain functioning can be measured by looking at the electrical pattern of the brainwaves. The shape/form of the pattern depicts how fast or slow the brainwaves are moving, and thus how they are classified.  When brainwaves become over- or under-active in specific parts of the brain, we may experience behavioral, emotional, and physical symptoms.

How Does Neurofeedback Training Work? Expand

Neurofeedback works based on the principles of operant conditioning as a way to reinforce positive/balanced brain functioning while inhibiting less optimal or dysregulated brain activity. Simply put, the person gets rewarded when healthy, balanced brainwave patterns are occurring, which then get strengthened by repetition.

Sensors are placed on the scalp over specific regions of the brain associated with a given symptom profile, which then assess and monitor the person's actual electrical brainwave patterns. There is nothing that is invasive, as the sensors only serve to read brainwave activity. The sensors allow the person and clinician to "get a peek" at the brainwave activity that is processed by a computer, and which is converted into images that are presented virtually "live" as they are occurring.

What appears on the screen can be either simple or complex, and the client can choose from various feedback programs that would be pleasant and engaging. A child might choose a video game where a rocket ship flies through space; a teen might choose to play a jet-ski game, while an adult might like to see some pleasant scenery. Something relatively simple, such as the flame of a candle or snow falling on a Celtic countryside among many more feedback programs can be chosen.  All of these templates, though, will serve to realign, reshape, and rebalance the brainwave activity to more optimal and functional patterns.

The "game" one plays in a Neurofeedback training session are not like the ones played on a PC, Play Station or X-Box. The client watches a screen but there are no hand-held controllers, keyboards, or joysticks. The space ship will fly faster and pick up bonus points, or the flame of the candle might rise, or a gentle summer rain shower may fall when more balanced brain activity is being produced. The training game is calibrated so that the brain is gradually challenged to correct imbalances and to regulate itself. By changing the targeted brainwave patterns, one learns how to gain control over and to regulate brain states, feeling more relaxed, flexible, and centered.

Everything happening in the game is offering the brain information about its own functioning so it can regulate itself. Your job is to just to sit back and allow the brain to respond to the feedback.

It is important to note that the changes in brainwave activity are not introduced or programmed into the brain by the clinician; their role is to monitor the brainwave activity, setting the threshold levels for when goals are met and when rewards are applied. The changes might be only brief at first, but with additional training, they become more easily accessed and sustained as the brain learns how to become more self-regulated. In essence, with the help of a computer, a child or adult learns how to strengthen and re-train their brain, producing new positive patterns while breaking up old negative or maladaptive patterns that have been created in response to various stressors.

Some people describe Neurofeedback training as a way to build "brain strength" and flexibility. Others see it as increasing mental/brain "fitness", similar to cardiovascular training for the body. Unlike physical exercise, though, a life-long commitment to training is not required. Once these new patterns have been trained, it's hard for your brain to forget them, meaning that once the brain has been trained the positive effects remain.

Neurofeedback training is both physically and mentally relaxing. You may find an enhanced ability to be present with your ideas and thoughts, allowing them to flow at will. This contrasts with the intense concentration or "driven" nature of our minds as we go about our busy days. You may perceive a greater ability to focus, an increased sense of clarity, or a general feeling of calm. Many report feeling like they had just left a day spa as their mental and physical stress seem to fall away during training. It is all part of the brain working to restructure its functioning.

Neurofeedback is very gentle with change occurring in gradually. Usually by the tenth session (barring strong medications) you will be aware that your symptoms have waned, or may even be gone. Mostly, the changes and shifts are felt as you go about your daily life. Often clients are surprised after the fact, as they become aware that their symptoms are no longer present.

How Long Will It Take? Expand

Neurofeedback training is a learning process and results occur over time. Improvement in many conditions can be made in about ten sessions, though permanent change can take longer. Initially, sessions need to be frequent and regular, optimally two sessions a week although one longer weekly session may be sufficient. As the brain re-regulates to healthy brainwave patterns, the frequency of sessions can be reduced. Many symptoms can be reduced or extinguished by 10 to 40 sessions. Symptoms are recorded and tracked throughout the process so that training focus can be modified based on the symptom profile.

The amount of training time depends on the type of problem, training consistency, and presence of medication in one's system. Neurofeedback changes existing dysfunctional patterns while encouraging the development of new neuronal connections.  The formation of new neurons and connections in the brain typically requires two months to develop.  This is why improvements can be seen after a few sessions but may need longer to become permanent.

Who Can Benefit From Neurofeedback? Expand

Biofeedback (now called Neurofeedback) was first applied in 1972 as a tool in managing epilepsy. This success prompted exploration into treating Attention Deficit/Hyperactivity Disorder, with outcomes supporting good success over the past 40-plus years. Today this training technique can help a wide variety of mental, behavioral, and physical conditions. The effectiveness of Neurofeedback is a result of working at the source – the brain's electrical system – which regulates every other system of the brain and body.

Neurofeedback training has helped people with:

It is a good alternative for clients with mental or physical problems that defy easy diagnosis or have not responded well to medication or therapy, in addition to those wanting permanent improvement without side effects.

Psychotherapy traditionally provides the opportunity to learn more about oneself, or to develop stronger/new interpersonal and social skills. Neurofeedback prepares the brain to be able to learn and benefit from the relationship with a psychotherapist. As the brain stabilizes and develops an improved flexibility, the potential for personal growth is greatly expanded. One analogy is that Neurofeedback prepares the ground so that your "planting and growing" time with a psychotherapist is most effective.