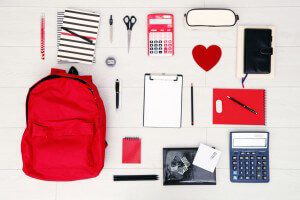 You are running late as you try to get the kids out of the house and into the car for school drop off. You anxiously wait while your 10 year old has once again neatly emptied his backpack and is checking to make sure his homework is complete and filed in the 3rd pocket of his red folder. At first glance, this seems like a studious and thoughtful child who has a strong skill at organizing. The fact that this child needs to complete this ritual twice the night before and twice before school and will experience significant stress if these rituals are interrupted illustrates more than strong organizational skills. The absolute need to complete these rituals as a way to reset emotionally in order to move on, is an example of Obsessive Compulsive Disorder.

OCD is driven by a negative irrational thought (obsession) loop that requires a behavior (compulsion) to temporarily relieve stress. Imagine listening to a broken record for 5 minutes. Each minute you grow more irritated and uncomfortable as the 10 second music loop starts and abruptly restarts. When the five minutes are up, you leap into action taking the needle off the record with great relief. Now replace the music loop with a thought loop (I have to make sure my homework is complete and it is in the proper folder to avoid failing my classes). Then replace taking the needle off the record to relieve distress with a behavior (going through the backpack and checking homework and folders). Lastly, repeat this process multiple times a day. This is the exhausting process of OCD.

It isn’t abnormal that humans at times display obsessive or compulsive behavior, especially in situations that are very stressful. We receive comfort through these activities. Some might even jokingly say, “oh, he’s OCD”, when a person exhibits these kind of behaviors, but that doesn’t mean they truly have Obsessive Compulsive Disorder.

If you notice that your child has been engaging in compulsive or obsessive activities for a while, it’s time to pay closer attention. According to statistics, OCD affects at least 1% of American children, often beginning between the ages of 8 – 12 or the late teens into their adulthood.