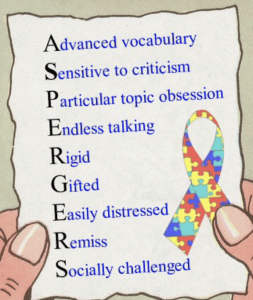 “His words were gushing out like a waterfall. I watched him pace back and forth in the room, recounting the statistics he had read in a book about baseball – his great passion. I knew a lot of people didn’t understand him. They often found his behavior annoying and odd.

“All his life, he had been uneasy with socializing. He didn’t like looking into people’s eyes. He usually was quiet around others. But when he would start talking, there seemed to be no stopping him.

“When he was in Kindergarten, they enrolled him in speech therapy. By second grade, they had diagnosed him with ADHD. I recall thinking that this diagnosis just didn’t seem to fit his pattern of behavior right.

“He definitely wasn’t like most other kids. Not street-smart but highly intelligent. He could read up a storm, but his handwriting was awkward and slow. It was a puzzle to me.”

This mother’s confusion is not unusual. It isn’t always easy to tell the difference between the symptoms of Asperger’s Syndrome and that of other behavioral problems – even for a professional. A doctor may diagnose a child with ADHD at first, only to change the diagnosis to Asperger’s in time.

How can you tell if your child has this problem?

Although every child displays different combinations of symptoms, in varying degrees of severity, there are certain signs you can look for.

10 Signs and Symptoms of Asperger’s

1. Have the tendency to fixate intensely on one or few specific interests

And do so for hours! They may also find it easy to memorize information and facts about their topic of interest.

2. Communicate in an awkward way

Some may sound like a little professor, speaking in a more formal way than others of their age. Other perhaps speak in a monotone or super fast. Often, they have problems taking turns in a conversation. They just talk, talk, talk – without noticing if the listener is still listening.

Having trouble reading the behavior of others, they might not work well in groups and have problems making friends. Also, it’s often hard for them to understand the subtleties of language. They may take what is said very literal. Or, they fail to understand if someone is joking or being serious.

4. Seem to have no empathy

But they only appear to be insensitive to other people’s feelings. The issue is really their problem reading others’ intentions. They truly don’t have any clue what other people feel or need. Often, they are in their own little world – daydreaming or zoning out.

Despite strong intellectual abilities and often an above-average IQ, they may lack common sense. They might have a lot of problems being organized, attentive, or productive.

This includes a specific time and structure for everything. Repetitive routines and rituals help them to feel in control. When these routines are changed, they may become very upset.

7. Have problems regulating their mood

When they feel overwhelmed, a violent outburst, a tantrum, or an emotional meltdown is not unusual. They have a very hard time controlling their emotions when things go awry.

From bad handwriting to poor athletic abilities. They may also be clumsy and make repetitive, uncoordinated movements, like flapping their hands.

Many avoid eye contact with others. Some might stare a lot. And others may make unusual facial expressions or have awkward body postures.

10. Be highly sensitive to sensory stimulation

Like light, sound, and texture. They may be easily overstimulated by specific sensations and bothered by things other people never notice.