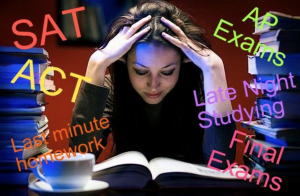 On one side, it motivates you, drives you on, infuses you with confidence. But it has a darker side, too. One that can engulf you, drag you down, push you over the edge.

If you decide to pursue success of your own free will, it’s your choice to expose yourself to the pros and cons. Yet, some parents pressure their own teen-aged children to run along those dangerous lines.

Why would they? And why could pressuring teens lead to disaster?

Why Parents Pressure Their Teens to Succeed

Certainly, most parents want the best for their children. They see their teens’ potential. They want them to realize it. Though well-intentioned, they can become influenced by the current culture of pushing academic excellence.

Success for teens in our culture is linked to scoring high on tests, getting into top colleges, and securing a well-paying career. Appearance, performance, and status are more highly prized than upholding values that seem unimportant in this competitive world. So, in order to spare them the disappointments and heartbreaks of failure, many parents put immense pressure on their teens to succeed academically — no matter the cost.

What they ignore is that this pressure can be too much for some children. That the future success of their teens is not determined by numbers and grades. And that happiness built on these things is at best an illusion.

Why Pressuring Teens to Succeed Can Backfire

Perfectionism and excessive expectations can lead to the dark side of the double-edged sword of success — social, emotional and physical stress. That stress, in turn, causes ailments and festering wounds, such as lying, cheating, disobedience, recklessness, substance abuse, social withdrawal, anxiety, and depression. Some teens simply collapse under the enormous pressure. They turn to self-harm or even suicide to alleviate the extreme stress — anything to find relief.

Others manage under the pressure and simply comply with their parents’ demands. The problem, though, with parents being overly involved and micromanaging their teens’ lives is that it all too often stunts their development. Their children inevitably miss out on learning problem-solving skills, applying good judgment, and cultivating independent thinking — the foundations of real success. They lack knowing and accepting their strengths and weaknesses. They don’t develop confidence, competence, values, and a secure sense of identity.

As a result, they consistently become reliant on the approval of others for judging their self-worth. And that need for external validation can slowly create a self-absorbed person who utterly lacks self-motivation, concern for others, or a drive to learn. An unhappy, defeated, and unfulfilled person — the exact opposite of successful.

Albert Einstein’s words can help parents remember what true success is all about. It is connected with purpose, meaning, curiosity, and optimism. It also has to do with knowing what you’re capable of, how to manage your emotions, and being able to overcome obstacles.

A teenager can develop all of this if their parents give them space. In a supportive role — if they’re responsive rather than reactive, present instead of preoccupied, and interested instead of controlling — parents can help their children succeed beyond their imagination. They can let them find themselves, the things they love to pursue, and do their personal best.

There is an infinite number of ways to success in this world. Let your children explore them and find them under your guidance and protection — not under pressure. It may surprise you how curious and passionate they can become about learning if you take the pressure off and stop pushing so hard.

After all, as a loving parent, you surely don’t want to push them over the edge.