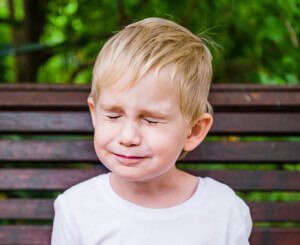 Here it was – the dreaded math test.

And with it came the oh-so-familiar urge. He could feel it getting stronger. He tried to control it. Tried to hold it in. But it kept building, until he just couldn’t hold it back any longer… and he let it out.

His shoulders jerked several times. Relief washed over him.

A quick glance around. His worries were eased when he realized that nobody seemed to have noticed his unusual behavior.

The child in this scenario is dealing with a tic. Statistics show tics affect some 20% of school-aged children and most often occur in boys. Tics are short-lasting repetitive movements or sounds that cause interruption in normal behavior.

Tics are usually temporary, lasting no more than 3 months, but can also become chronic, going on for more than a year. A child can have one kind of tic for a while, then it goes away, only to develop another kind later.

As a concerned parent, you might wonder, “Why is this happening?”

Children often develop tics when another condition already exists that functions as a trigger. Such things as ADHD, autism spectrum disorder, obsessive-compulsive disorder, or even allergies can contribute to a child developing tics. Also, situations that heighten anxiety, worries, and stress – like sleep deprivation, pressures in school, or someone close to them falling gravely ill or dying – can trigger tics or worsen them.

What You Can Do About Your Child’s Tics

Since most tics are temporary, doctors usually tell parents not to worry about them unless they become chronic* or severely debilitating. Despite their assurance, though, you might want to know what you can do to help your child cope with their tic while it exists.

Some of the simplest self-remedies you can make use of aim at not making the tic worse. Make these suggestions to your child:

Professional treatments are meant to target the underlying condition that could be triggering the tics in the first place. Examples are:

* In some cases, what seems to be chronic tics could actually be Tourette’s syndrome.