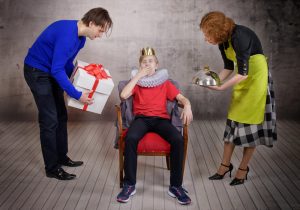 A 4-year-old boy scolding his mother sharply for not getting him the food he wanted.

A 7-year-old girl loudly interrupting her father’s conversation with another man, demanding to leave.

An 8-year-old girl throwing a tantrum because her parents went to the movies without her.

A 12-year-old boy shouting at his teacher for removing his cell phone because he was playing games during class.

Have you seen it? Heard of it? Or experienced it yourself?

Those are the results of Spoiled-Child syndrome.

Recognize Your Role in Spoiled-Child Syndrome

Certainly, no parent sets out to create a spoiled child. So, how may you have played a role in taking it that far?

Ask yourself: Do I keep buying my child things despite not being able to afford it, and even though they already have an abundance?

Maybe you work really hard because you want to give your child everything you didn’t have. Ultimately, though, you end up overindulging your child and giving them the impression that the world revolves around them. Instead of learning to be satisfied with what they have, you taught them to always look for the next new thing.

Ask yourself: Do I often give up in exhaustion instead of enforcing limits?

Possibly you’re simply so exhausted at the end of the day that you don’t have the energy to deal with a defiant child and enforce consistent rules. So you do almost anything to keep them happy. But through your inconsistency, you’ve now taught your child that rules don’t count.

Ask yourself: Do I typically sweep in to rescue my child from their problems?

Perhaps you want to protect your child from the things that they fear or from the failures and disappointments of life. But by always jumping in and rescuing them, not only do you teach your child to rely on you to do everything for them, you show that you apparently have no confidence in them.

How You Can Reverse Spoiled-Child Syndrome

First, you must be determined to actually accomplish your mission as a parent – stop spoiling your child and instead raise them to be a respectful, responsible, and confident person.

Help your child understand that happiness is gained through hard work and effort. Show them the value of responsible behavior by modeling how you take care of your responsibilities and let them see the satisfaction you get from working hard. Let them do chores so they can save up for something they want to have. It will teach them patience and gratitude.

Don’t confuse your child with long explanations or debating over rules. Instead, simply set limits, give consequences, and enforce the rule. If your child refuses to pick their toys up, put them away for a few days. If they don’t want to brush their teeth, don’t let them have treats. And if they neglect handling responsibilities because of their electronics, prohibit the use of those devices for a while.

Allow them to face challenges

Teach your child problem-solving skills to overcome difficulties and express your confidence in their ability to handle the challenge. If your child causes difficulties for themselves through their behavior, allow them to face the consequences. Accepting responsibility for their own actions fosters emotional and mental growth.

While it may be hard to stop spoiling your child, the payoff is worth it. If you take your mission seriously, your child will learn invaluable lessons that will benefit them throughout the rest of their life. It’s never too late to start – 10 years of spoiling doesn’t take 10 years to undo.