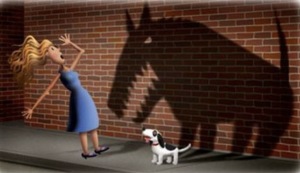 Have you ever seen one of those rubber snakes that looks so real you couldn’t tell the difference?

Maybe you walked up to someone’s front door and, in the corner of your eye, you caught a glimpse of a coiled up reptile.

You jumped about ten feet to the side with a squeal. And then you realized that it was just a fake.

That’s your amygdala in action!

Have you ever walked into a gathering of people in a room far too small for the crowd?

The noise, the heat, and the smell of sweaty bodies were just overpowering. Worse even, once you came in, all fell quiet and everyone turned around, staring at you.

At that very moment, you could feel your heart wanting to jump from your chest. And the thing you wanted more than anything was to turn around and run.

The mere thought of having to say anything caused you to panic.

That’s your amygdala in action, too!

Your Amygdala – What Exactly Is It?

You would probably imagine that a part of your body that yields the power to cause such strong reactions would be fairly sizable. But quite to the contrary, the amygdala is not much bigger than an almond.

Its great power lies in the neurochemicals it stimulates.

Your brain constantly receives signals from your sensory system—sight, sound, taste, smell, and touch. The amygdala scans this data for any danger signals or threats.

When it perceives danger, it reacts immediately by stimulating the release of cortisol and adrenalin. This, in turn, activates that familiar fight-or-flight response. Your heart begins beating faster, your breathing becomes shallow, and your pupils dilate.

The reason the amygdala can respond so rapidly is because it’s hard-wired for exactly that kind of situation. It needs no time to think it over, weighing all possibilities. It just reacts, without your conscious awareness. That’s because speed is crucial to protect you from any threats.

If you had to rely on your cerebral cortex, the intellectual part of your brain, you may not fare so well when you’re confronted with danger. It’s way too slow!

Your Amygdala – Its Connection to Fears and Phobias

While the services of the amygdala are very useful in real danger situations, it does not differentiate between a perceived and an actual threat.

Think about that second scenario at the outset—the crowded gathering.

It may be a stressful event, but it’s not a life-threatening situation. Yet, you still may panic, freeze, and even run off. At that very moment, the amygdala disconnects you from your rational thinking and your reaction becomes merely impulsive.

The thing is, when you react by fleeing from the situation, you teach your amygdala that there truly was a threat and it remembers that reaction. It learns to associate that crowded room with danger and it will continue urging you to respond the same way every time.

You see, your amygdala doesn’t learn by conscious thoughts—it only learns from experience.

And that’s exactly the reason why you can’t just talk yourself out of an anxiety attack or a phobia. Because the fear you experienced and your reaction to it are now stored in your brain as a trained response. No reasoning or discussing will overwrite that—the fear is conditioned into you.

This means, in order to overcome your phobias and anxieties, you have to retrain your amygdala. You have to teach it that there is no real danger and you are okay.

When the perceived danger passes or you take action to remove yourself from the situation, the amygdala stands down and stops stimulating those neurochemicals that urge you to act.

Think about that first scenario at the outset—the fake snake.

Once you realize that it’s just a rubber reptile, your body calms down. Your brain registers that it is not a source of real danger.

The same calming effect happens when you give your brain the time to process the sensory input it receives consciously. When you know there is no life-threatening danger—as in the scenario with the crowded room—and you allow your prefrontal cortex time to analyze the situation fully, you get to choose a better response instead of a hasty, impulsive reaction.

This is the key to retraining your amygdala!

Remember, it learns from experience. That means you have to trigger it by exposing yourself to the feared situation and allow time to pass before you react, staying in that situation until your fear subsides.

In that way, you give your amygdala the chance to learn that it got excited about nothing at all. In effect, you’re retraining it to understand that a specific situation isn’t the threat it was conditioned to believe.

Using this method, exposure therapy 1) gradually exposes you to anxiety producing situations, 2) helps you to stay in place and give your brain time to adjust by using a variety of coping skills, and 3) affects changes in your brain, allowing your amygdala to form new associations.

Of course, changes won’t happen from one day to another. It’ll take time. But with repetition, you can successfully retrain your amygdala so that phobias and anxiety attacks will no longer disrupt your enjoyment of life.

And that is exposure therapy in action!