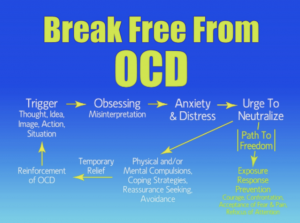 The most natural reaction to something we fear—be that people, objects, or situations—is usually to avoid it.

Unfortunately, though, that innate action is often the least helpful response.

Think, for example, of someone that suffers from Obsessive-Compulsive Disorder (OCD).

The urge to eliminate or avoid something that they fear—contamination, harming others, losing control, etc.—is exactly what motivates their ritualistic behaviors.

That is why someone who fears contamination may try to avoid getting sick by washing their hands. Sounds logical, right?

But an OCD sufferer who is worried about contamination takes this to a whole different level. Their knowledge that hand washing doesn’t make them completely immune to germs and their fear of still getting sick drives them to wash their hands over and over and over again.

By trying to avoid what terrifies them, they actually create a cycle that completely takes over their lives.

Perhaps you know someone—a loved one even—who suffers from OCD. Your compassion for them and their plight may motivate you to want to get rid of the object of their fears. A natural response.

Maybe you are keeping the house as germ-free as possible to alleviate their worries of contamination. Maybe you avoid going to certain places to soothe their fears of exposure to dangers. Or maybe you have embraced a lifestyle that calls for eliminating anything that may cause a certain catastrophic illness.

All in an effort to try to help that person and free them from their OCD.

The problem is, that approach doesn’t really work. Instead of ridding them of their OCD, it only creates a breeding ground for their obsessions and compulsions. And, in turn, it prolongs their suffering.

The plain truth is that you simply can’t get rid of fear by avoiding what you’re fearing.

But if avoidance doesn’t work, what can help an OCD sufferer the most?

The best way to help a person afflicted with OCD is not to protect them from what terrifies them but to expose them to those feared people, objects, and situations. Therapists call this method exposure therapy.

There are many types of exposure therapy approaches. In general, though, all exposure exercises require for an OCD sufferer to directly confront their worst fears, without any type of protection. Often, that includes doing specific things that will make them (or anybody else, for that matter) feel quite uncomfortable. While that may seem brutal, this method has actually proven to alleviate OCD symptoms on a consistent basis.

The fact is that only by confronting their fears can those with OCD actually learn to cope with them. Rather than coming up with ways to avoid their anxiety, therapy helps them to begin to realize that their worries almost always deceive them.

Step by step, a therapist teaches them to deliberately face their fears by assessing the risks of each different situation and weighing the dangers realistically. Over time, OCD sufferers actually learn to live with the uncertainties of their catastrophic anxieties and to understand that they can survive—and even flourish—despite feeling threatened by their fears.

Thus, exposure therapy empowers someone struggling with OCD to work toward the goals they want to achieve, even if they’re scared of the possible risks and consequences at first.

Is exposure therapy a cure for OCD? – Certainly not.

But the bottom line is, when you confront what terrifies you, you only become stronger.

In that manner, exposure therapy offers those afflicted with OCD a way to manage and lessen the symptoms of their ailment. Better, even, it gives them a real chance to take back their lives.