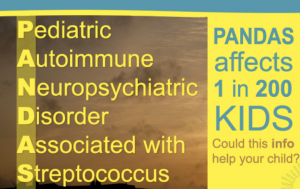 Unfortunately, it has nothing to do with cute black and white animals. To the contrary, it’s actually a scary condition that some have estimated affects 1 in 200 children.

But what does it have to do with teen OCD?

PANDAS usually begins with a seemingly harmless childhood strep infection, but it can have lifelong effects for some. How?

While the strep bacteria can evade detection for a long time using molecular mimicking, eventually your child’s immune system will recognize it as a foreign invader. That is when the immune system begins its attack, producing antibodies. However, this defensive reaction not only affects the foreign strep bacteria but also the host molecules of the child’s body tissues that it was mimicking.

Worse even, some of these antibodies may begin targeting a child’s brain tissue, causing (or increasing already existing) neuropsychiatric symptoms, such as:

These symptoms usually express themselves dramatically and happen suddenly, as if out of the blue or overnight.

PANDAS – Its Connection to OCD

As you’ve probably noticed, obsessions and/or compulsions are one of the prominent symptoms of PANDAS. In fact, over the years, reports repeatedly have shown that some children with strep infections suddenly showed severe Obsessive Compulsive Disorder (OCD) behavior.

These instances initiated several research studies that have made note of the same observation—the obvious sign of obsessive and compulsive symptoms in some children with strep throat.

In time, researchers found that children demonstrating these OCD symptoms actually had higher levels of strep infection-related antibodies. They also discovered that this increase in antibodies caused brain swelling which, in turn, led to their sudden obsessive and compulsive behavior. Moreover, doctors noted that giving these children antibiotics to treat the strep infection decreased their OCD symptoms as well.

They believe that due to exposure to excessive amounts of the strep antibodies produced by their own immune system to fight the infection, some children experience neurological changes which can lead to the sudden development of OCD.

This thesis is still under dispute by some. Yet, a growing body of evidence seems to indicate that at times OCD may indeed have biological and neurological origins.

How Does PANDAS Affect the Treatment of Teen OCD?

While childhood/teenage OCD presents certain age-related complications, in general, the basic approach to treatment is the same as for adults. This includes treatment for teens with PANDAS-based OCD.

Therapy may involve a combination of:

However, if it has been determined that your teen’s OCD was caused by PANDAS, one other matter needs to be taken into account—recurring strep infections. This means, during an active strep infection, the child’s normal OCD treatment regime would have to be adjusted. Why?

As the chance of further swelling of their brain and a subsequent increase of OCD symptoms due to overproduction of antibodies rises, an immediate treatment course of antibiotics must begin. However, when antibiotics start taking effect on the strep infection, they will also begin to reduce symptoms of OCD. Therefore, the attending therapist must be prepared to make adjustments to the standard treatment for your teen’s OCD accordingly.

Taking all this into account, it becomes clear why it’s important that your child receives treatment by a therapist who is specialized in treating child/teen OCD and who also has experience with therapy for PANDAS-based OCD.