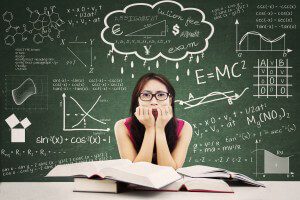 Her smile faded as her daughter’s car pulled out of the driveway. The woman closed the front door with a long sigh. It had been a hectic morning. Her daughter had overslept once again. Rushing to get dressed and out of the house to head to college, her child had managed to hurriedly eat a few spoonfuls of oatmeal before hastening out the door. It was no wonder she often complained about having stomachaches; she wasn’t eating well lately, and when she did, it was often in a rush.

The mother picked up the leftovers from breakfast. Her eyes fell on the cellphone lying beside the bowl. As she took the dishes to the sink, she glanced out of the window, expecting her daughter’s car to pull into the driveway any moment to come back for her phone. She was sure to be irritated, but that wasn’t a rarity these days either. Perhaps she would simply end up skipping class again.

The sound of a car door slamming snapped the woman out of her contemplation. She turned toward the door as her daughter burst into the house. Complaining about a headache, her eyes searched the room. The mother silently pointed to the cellphone on the table; any noise would only cause an emotional outburst. She held out a bottle of aspirin as her daughter dashed passed her and into her room.

The woman exhaled, a concerned look on her face. She had been so proud when her daughter had started attending college, but this just wasn’t her child any more. Something was terribly wrong.

Since stress is very much a part of our every-day lives, the parent in this scenario could easily dismiss her observation as a trivial matter – just a normal fact of life. After all, it’s no great secret that the path to a college degree is often a very difficult one. It requires time and dedication to handle all the demands – like juggling college and a work schedule, having multiple projects due at one time, or being confronted with a difficult teacher. However, in order to achieve a positive outcome, the level of stress a college student is exposed to has to be manageable.

Although the number one word that college students use to describe their lives is “overwhelmed,” many of them are unaware that they are experiencing major stress. Why? Because often times they are too busy with their work and their school assignments to even recognize the symptoms. A loving and concerned parent realizes that.

So, how can you tell if college pressures are overwhelming your child? –

Here’s how you can spot the signs.

If you notice any of the aforementioned symptoms, they could very well be a sign that your child is overwhelmed by college pressures. Don’t turn a blind eye to the problem. It’s time to take action to help your child cope with and overcome the issues.

If you discover your child has turned to unhealthy habits to help alleviate the stress – such as drugs and alcohol – make sure they get immediate and capable professional help.