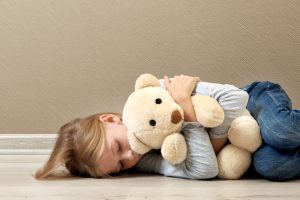 You’ve been watching your daughter listlessly poking around in her food. Spaghetti and meatballs are usually her favorite.

The matter only serves to highlight the overall somberness you’ve observed in her lately. Especially, after that last report card hadn’t been as shiny as it used to be. That’s why you decided to take this vacation—fun in the sun, adventure, amusement parks—in the hopes that it would cheer her up.

You thought it had started with the drop in her grades, but now you’re wondering. Could it actually be more? Could it have something to do with the many things that have been happening in your family in the past half year?

As the parent, you are the expert of your child’s life.

You’re there every day. You’re familiar with their routine, their habits, their moods. You’re the one that knows what’s normal and abnormal for them.

If you have a hunch that there’s something wrong—there probably is.

But how can you be sure if it’s more than just a case of intense moodiness?

The Blues versus Depression – What’s the Difference?

Honestly, it can be hard to tell the difference. But in general, the blues, or moodiness, comes and goes as children grow up. In contrast, depression is characterized by a constancy and intensity that separates it from normal growing pains.

Sometimes, we may think it’s so easy to be a child in comparison with being an adult. What would they have to be depressed about?

The truth, though, is that there are many challenges and painful experiences with which children these days are confronted. They may look and act “different” than the majority of their peers. They may have learning difficulties and academic problems. This makes them stand out and elicit the attention of others—and often not in a good way. This can become a real trial for them.

Moreover, some children have to deal with serious family issues, such as the divorce of their parents, a family member’s problems with substance abuse, and even domestic violence.

So, yes, even young children can become depressed, although true depression may not be common among them. According to the National Alliance on Mental Health Illness, some 2 percent of school-aged children are suffering from this condition.

What exactly are the symptoms you, as a parent, can look out for?

The Symptoms of Child Depression

It’s important that you realize there is no single sign that your child may be depressed. It’s a combination of symptoms that are normally a result of various factors.

1. Change in appetite or eating habits

Noticeable changes in appetite, such as not eating as much, not enjoying what they used to like, or becoming an emotional eater.

2. Shift in academic performance and interest in school

Negative changes in academic reports, such as grades dropping, refusal to go to school or participate in classroom activities, becoming a daydreamer, or getting into trouble at school.

3. Withdrawal and loss of interest in favorite activities

They have a decreased interest in various aspects of life and persistent boredom. They don’t enjoy being with friends or doing activities they previously liked. Nothing seems to excite them anymore. They have low energy and trouble concentrating on anything.

Consistent complaints about being physically sick, having headaches and stomach ailments that last for a while and don’t respond to treatments.

5. Restlessness and changes in sleeping pattern

Feeling anxious, tense, and fearful can cause fidgeting, restlessness, and having trouble sleeping at night or sleeping far longer than intended.

Moods can swing from irritability and anger to sadness and crying profusely. One time, they may cry over the smallest things, while at another time, they have a violent outburst.

7. Lack of confidence and self-esteem

They may become very hard on themselves for their imperfections, feel guilty for no reason at all, or believe they’re worthless and don’t matter to anyone. All this leads to a lack of confidence and low self-esteem.

A fixation with the idea of dying, such as expressing hopelessness and talking about death a lot. It’s especially concerning if they mention that they want to die.

Yes, while shocking to contemplate, even children as young as 10 years-old can have problems with alcohol and drugs. If your child seems inebriated or spaced out, investigate the matter promptly.

Anything from persistent stress to the death of a beloved relative or pet can contribute to your child developing depression. That’s especially so if a lot of negative things happen in a short time frame.

All children don’t react to these events by becoming depressed. Nor do the above-mentioned symptoms exclusively indicate that your child has depression. They could also mean that your child may suffer from another problem. In either case, as a caring parent, being proactive and seeking help is the right thing to do.