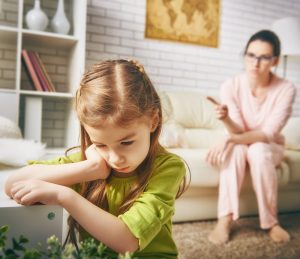 If you make a child feel loved, you’ll foster cooperation.

But is it really that simple? Is just giving love enough?

What happens when, despite you showering your child with love, they still don’t want to cooperate? Do you get annoyed? Exasperated? Angry?

Do you perhaps end up falling back on shaming your child into cooperating?

That tactic may often work. But at what cost?

Of course, children need discipline and boundaries. No question about that.

But is there a way to teach your child to cooperate without shaming them? Without being overly critical and crushing their self-worth?

First, consider the role of shame in learning.

The Difference Between Mild Shame and Toxic Shame

Effective parenting is not usually something that comes intuitively. To get your child to obey, you may inadvertently repeat the same unhealthy shaming patterns that you perhaps learned from your own parents.

Of course, there’s a difference between experiencing mild shame and being subjected to toxic shaming.

Mild shame is produced when you tell your child “no” and explain why something they want to do is not safe, not acceptable, or not good for them. Experiencing that mild shame helps them learn rules—how to control their impulses, how to get along with others, and how to reach goals.

In time, learning through this type of shame allows your child to develop the ability for self-regulation and self-discipline.

Toxic shaming, on the other hand, doesn’t teach self-regulation but rather self-degradation. It’s produced when you repeatedly tell your child “no” but, instead of explaining, scold or punish them for being “naughty” or “trouble” or “bad.”

While the child hears the “no” and understands that their specific action is not good, they also begin feeling that they are not good. In other words, experiencing toxic shaming can cause a child to internalize the message of “bad” as something being connected to them as a person.

In time, instead of incorporating the limits you set for them about what is ok and what is not, they may end up becoming defiant, rebelling against that internal voice that is telling them they’re defective in some way.

As mentioned at the outset, children obviously need to be taught limits. How you do it, though, makes the difference between fostering rebellion or motivating cooperation.

How to Teach Your Kids to Cooperate

To get your child to cooperate and demonstrate appropriate behavior—without shaming them—much depends on your initiative as an example, communicator, supporter, and teacher.

One of the most powerful first steps a parent can take to help their child cooperate is to be a living example of what is acceptable and what’s not.

If your child sees you showing restraint, good judgment, and cooperation when interacting with others, they will learn positive social behavior as well. Conversely, if they see you constantly acting on impulse, being critical, or yelling, they will begin to mimic that as socially acceptable behavior toward others.

Although seemingly harmless, many ways parents respond to their children’s behaviors actually provoke shame. Often, you may not even be aware that ridicule is infiltrating your words.

To consciously resist ridiculing or criticizing your child and instead just empathizing with them without judgment can look something like this:

Supporter – Being Attentive and Open

Secrets often produce shame. That’s because when something isn’t talked about, your child may assume it’s “bad.” And that can include things about them.

What if they have a bodily feature they don’t like? Instead of keeping it hush-hush, allow your child to express themselves about it. Don’t minimize their worries, even if you truly feel it’s no big deal.

But be positive and supportive. Listen and discuss the matter—or any other issue that’s important to your child—without a judgmental or dismissive attitude.

In other words, to a reasonable degree, nothing should be off-limits.

You wrangle cows, but you guide children. They don’t need wrangling if they receive loving direction.

Of course, guiding your child also means you’ll have to set limits or boundaries. But if you do so with compassion and empathy—putting yourself in their place—you help your child learn to practice self-regulation and manage their impulses. If they can see your empathy as you set limits, it’s easier for them to accept the boundaries and to want to cooperate.

Conversely, the harsher and more unfeeling you are when setting limits, the more your child will probably resist. In effect, parental punishment often only works to a degree. While it’s true that your child’s behavior will, and should, reap certain consequences, natural consequences usually drive the lessons home much better than parent-inflicted ones.

Undoubtedly, when you shower your child with love, it helps them grow and be emotionally and mentally stable. And if you combine these expressions of love with being a good example, communicating well, supporting your child, and teaching them with compassion and empathy, you can get them to cooperate without ever having to shame them.