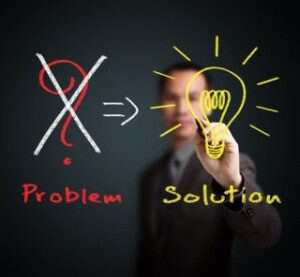 For many of us, this quote helps to quantify how much time is spent on the identifying, thinking and even becoming bogged down in the emotional mire of our problems while seemingly forgetting about possible solutions. Depending on the situation, it may be a good idea to spend more time and energy thinking about a problem but when does the thinking become a problem unto itself? Past a certain point, reflection can turn into rumination and is no longer a process of resolution. We can easily get stuck in thoughts and feelings — dwelling in negativity, suffering in the pressure-cooker to resolve the issue, and subjecting ourselves to condemnation, anxiety, and fear. We over-think it and we lose our way….

Step Back and See the Picture

Often what has happened is this: When we are in the midst of it, we lose our ability to assess the problem, it’s size, and what it will actually take to solve it. If you have your nose pressed up against a painting, all that you can see are some blurred colors, loose shapes, and no larger context. Once you take a few steps back, you begin to gain some clarity, and with another step or two, the picture is clear. Some problems are similar in that objectivity is lost the closer you are to them. Sometimes our emotions can prevent us from attaining objectivity and disallow us our faculty of logical thought. Space and time can wash away worry, anxiety, and fear so that we can achieve a more realistic appraisal of the problem, which can then be followed by a logical approach to solving it.

“Accept the Things I Cannot Change”

This is a tough one but may be one of the most helpful. Sometimes with surrender comes a loosening of the knot. I know this has been true for me. I have found myself wrestling with a problem, becoming stressed, then thinking about it some more right before I decided to think about it a bunch more. All that resulted was a tension headache and undue stress as I realized the problem was not in my control at the moment. The real solution was not the end result of completely extinguishing the problem; it was rather accepting that I could not do anything to resolve the problem in that moment. Realization that temporarily surrendering was a respite point, allowed me to move on from all the emotional unrest & paralysis. I got out of the cognitive quicksand through a bit of meta-dialogue with myself by saying, “I can’t fix it now so I need to put it on hold until I can. When ready, the solution will come”.

Many times the problem really isn’t a specific task, chore, or project. The problem becomes all about the procrastination and/or overwhelm that accompanies the process. Monthly bills, yearly taxes, and going to the dentist/doctor are all common tasks that most of us put off because of the displeasure we feel when doing them. We adjust how we think, feel, and behave to give ourselves reassurance that these things can be handled later. Meanwhile, other problems arise that we may put off till later and before you know it, feelings of anxiety and stress start to surface. It’s all backing up and getting bigger, like the proverbial snowball rolling down the hill. We wind up standing at the foot of an immense wall, tiny and frozen by the perceived difficulty and anticipated dread…

Taking action is the obvious antidote to procrastination and the stress that comes with it, however, the action you take can does not mean you have to suck it up and get everything done NOW. Simply SURRENDER for the moment, but purposefully so this time. Maybe go water the lawn, sweep the floor, crank up some old rock tunes — anything that will get you into a mindless, meditative state for 15-30 minutes. Come back refreshed, ready to work on a few smaller pieces of the problem that you can get organized and structured. Prioritize & calendar a few tasks with firm deadlines, as getting even some small chunks done can help to get other pieces into an order that is easier to focus on. Write things down, draw up a flow chart, and cross things off as you get them done. Get rid of the mental checklist and all the associated stress of juggling hunks of memory. Set-up a defined work spot so that you are not carrying the load everywhere you go. Surrender again and again if you need to, but each time come back refreshed and a little bit clearer, and with a little bit less to do upon return. Maybe then, even if we only have an hour to solve a problem, we would be able to do as well or even better than Mr. Einstein!